A Word From St Barts Clergy

by The Reverend Peter Thompson on October 02, 2020 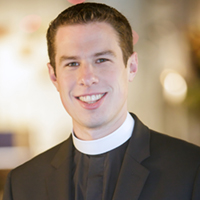 This week, we turn from St. Bartholomew to St. Francis, the thirteenth-century Italian friar whom we commemorate each year with a Blessing of the Animals. Though we won’t be able to gather physically this year for the Blessing, it will still take place virtually on Sunday at 2 pm. I hope you’ll grab your furry or scaly friend and join us on Zoom!

Viewed through a certain lens, the Blessing of the Animals is a very fitting way to honor Francis. By all accounts, Francis loved the natural world. He famously preached to the birds and engaged in an extended dialogue with a wolf. His best known work, the Canticle of Brother Sun, invokes sweeping images of sun, moon, wind, water, fire, and the entirety of “Mother Earth” with its “colored flowers and herbs.”

In associating Francis with domestic animals, however, we risk domesticating Francis himself. Francis’ object of attention in the Canticle of the Brother Sun (later paraphrased and translated into English in the hymn “All Creatures of our God and King”) is nothing less than the whole cosmos. The way Francis sees it, all of creation—not just the cute bits, not just what is found on planet earth—sings God’s praise. Even Death is a part of the chorus hymning the divine.

In truth, Francis’ approach to life was far less appealing than we might generally like to admit. He was not a happy-go-lucky guy focused principally on celebrating photogenic pets. He was a radical visionary committed to extreme poverty. “In Francis’ view," The New Yorker's Joan Acocella explains in a masterful 2013 article, “property, by arousing envy and, therefore, conflict, was the one thing most destructive to peace in the world. Thus [his] community lived, as completely as possible, without property. To be part of the group, a man had to sell all his goods, give the money to the poor, and, like Francis, sever all ties with his family. Francis’s followers dressed the way he did—dirty tunic, no shoes. Their home was a wretched little shack outside the town.” They were not even allowed to save food or money for the next day’s use.

People of Francis’ time thought he was crazy, and they may have been right. He certainly did not do things the easy, or even marginally acceptable, way. But conformists—those of us who simply go along with the way things are—are rarely remembered by history. And they certainly don’t seem to be the vessels through which God changes the world.