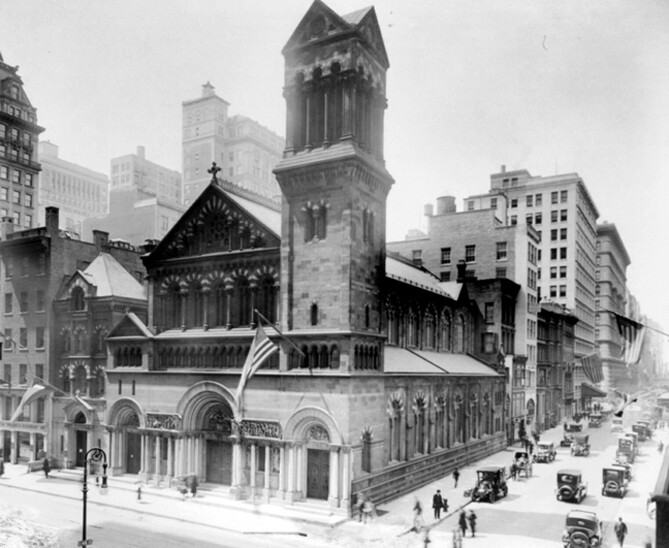 A Brief History of St. Bartholomew’s Church in the City of New-York
Founded in January 1835, initially in the then-fashionable Bowery section of Manhattan, St. Bartholomew’s began its life as part of the Evangelical movement in the Episcopal Church. Worship services were held in a plain church at the corner of Great Jones Street and Lafayette Place.  At first growth was slow, but by 1872 St. Bartholomew’s was large and prosperous enough to build a splendid new church at Madison Avenue and 44th Street. Designed by James Renwick, the architect of St. Patrick’s Cathedral, the building was later embellished with a triple portal by Stanford White. 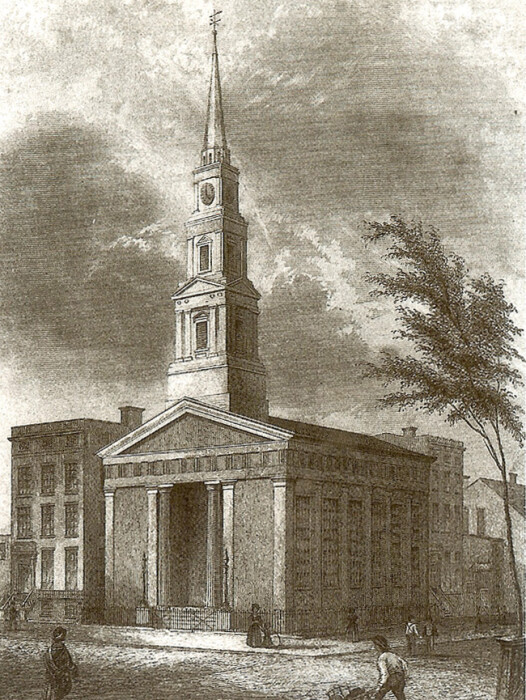 It was from the Madison Avenue pulpit that The Rector David H. Greer in 1888, inspired the parish to become a major force for social welfare in the city. During the enormous immigration of the late 19th century, St. Bart’s huge parish house on 42nd Street (built with the support of the Vanderbilt family), ministered to large numbers of the new arrivals, who lived in appalling poverty in the tenements of the East ’40s and ’50s.

St. Bartholomew’s also became a force in the musical life of the city and the wider church. Under the leadership of organist Richard Henry Warren, a full choir of men and women became famous. Leopold Stokowski, who went on to a career as one of the world’s greatest conductors, was brought from Europe by St. Bartholomew’s to direct its choir.

Over time, serious structural problems developed in the Madison Avenue building, so the parish commissioned Bertram Goodhue to design a new church on Park Avenue between 50th and 51st streets, St. Bart's current home. In 1918, the parish moved into the new building, which was built in the Romanesque style and provided a harmonious setting for the Stanford White portal which had been brought from the old building. As funds and materials were available, the interior was decorated in the Byzantine style with major mosaics in the narthex and over the high altar. 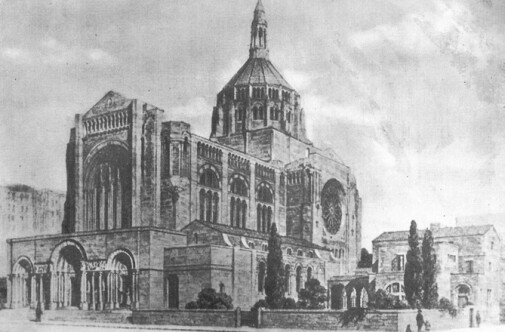 In the 1920s, as the neighborhood changed, immigration slowed and tenements gave way to apartment houses and offices, and the Parish House and clinic on 42nd Street were closed. The Community House, adjoining the church at 50th Street, was built during Rector Robert Norwood’s tenure (1925–32). A poet and prophet, Norwood was a dynamic preacher who brought large crowds to the church week after week and ministered to the growing number of young professionals flocking to the city. 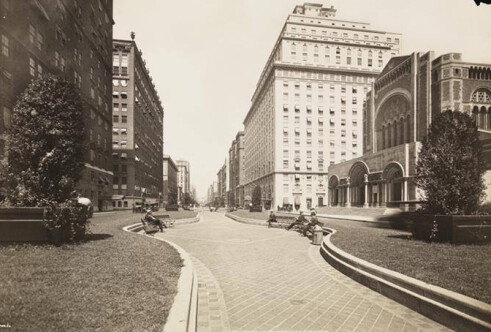 Well into the 1960s, St. Bart’s was one of the three or four largest congregations in the Episcopal Church. As its immediate neighborhood changed from primarily residential to corporate and commercial, the parish ministry increasingly reached out to the community and non-members. The music ministry included more public concerts, and St. Bartholomew’s took the lead in midtown in beginning a substantial ministry to the poor.

In 1981, a real estate developer offered a plan to build an office tower on the site of the adjacent community house, ensuring a financial endowment of the church's mission and maintenance. Conflict developed within the parish and between the church and the city over the designated landmark status of the building. In the ensuing years of battle, St. Bart’s became synonymous with the very real issues between the religious community and the historic preservation movement, and with the attendant constitutional questions. The case tortuously worked its way, over eleven years, to the Supreme Court, which in 1991 declined to hear St. Bartholomew’s appeal of the Second Circuit decision. The congregation paid a heavy price for the battle. Half the membership left, and charity and relationships were strained. The existing financial problems deepened. Maintenance on the building was deferred.

In the calling of a new rector in 1994, church leadership made a commitment to growing St. Bartholomew’s as a congregation, as well as restoring and preserving its landmark building. As a result, attendance and membership increased. Today, the independent St. Bartholomew’s Conservancy works full time to both preserve and restore our historic space.

In 2016, under the current rector, The Right Reverend Dean E. Wolfe, St. Bartholomew’s was designated a National Historic Landmark and continues to enjoy a good working relationship with the New York Landmarks Conservancy.

As a sacred oasis and designated New York City Landmark and national Historic Landmark, we invite you to download and read a full history of St. Bart's from one of the links below.