Not in that Poor Lowly Stable

At this Sunday’s majestic Candlelight Carols service, a single voice will set the stage for the rest of the evening’s proceedings. “Once in royal David’s city,” the soprano will sing, “stood a lowly cattle shed, where a mother laid a baby in a manger for his bed.” For many—especially those, like me, who were raised in the Anglican choral tradition—these words serve as the official start of Christmas.

The practice of beginning a Christmas Lessons and Carols service with “Once in royal David’s city originated in 1919 at the famous Festival of Nine Lessons and Carols hosted by King’s College Cambridge, which was then in its second year. Every year since, a single boy soprano has been selected to introduce the story of Christmas for those assembled in the chapel and, since 1928, those listening on the radio as well. Watch the Choir of King’s College sing it here.

As I explained in this fall’s Hymns 101 class, the hymn itself dates back to Cecil Frances Alexander’s 1848 collection Hymns for Little Children. Alexander’s main goal in that collection was to teach children the fundamental aspects of the Christian faith, including the Apostles’ Creed, the Ten Commandments, and the Lord’s Prayer. To help children understand the Creed, Alexander wrote a hymn to correspond with each of its phrases. The hymn for “maker of heaven and earth” was “All things bright and beautiful.” The hymn for “suffered under Pontius Pilate, was crucified, dead, and buried” was “There is a green hill far away.” The hymn for “who was conceived by the Holy Ghost, born of the Virgin Mary” was “Once in royal David’s city.”

Alexander’s hymns were certainly colored by the Victorian mores of her time. The original version of “All things bright and beautiful” contains a stanza that seems, horrifyingly, to endorse class stratification:

The rich man at his castle,
The poor man at his gate,
God made them high and lowly,
And ordered their estate.

In the original version of “Once in royal David’s city” (which we will not sing this Sunday, but many congregations still do sing), Alexander interprets the Nativity story as a lesson for children on how to quietly stay in their place:

And through all His wondrous childhood,

He would honour and obey,
Love and watch the lowly maiden
In whose gentle arms He lay.
Christian children all must be
Mild, obedient, good as He.

However, if you can look beyond the limitations of Alexander’s perspective on social issues, the theology of “Once in Royal David’s City” is actually quite sound. Alexander adeptly explains the Incarnation in a way that even a child can understand. While Jesus was a “little child,” who lived in humble surroundings “with the poor, and mean, and lowly,” she makes clear that he was also “our Saviour,” the “God and Lord of all.”

The most important stanzas of the hymn, in my opinion, are the last two, in which Alexander shifts the focus from earth to heaven.

The penultimate stanza reveals both Jesus’ true identity and our final destiny:

For that child so dear and gentle
Is our Lord in Heaven above;
And He leads his children on
To the place where He is gone.

Jesus became like us, in other words, but he will also make us like him. As the fourth century church leader Athanasius once said, God became a human being so that human beings might become God.

The final stanza puts the sometimes romanticized details of the Christmas story in ultimate perspective:

Not in that poor lowly stable
With the oxen standing by,
We shall see him; but in Heaven,
Set at God’s right hand on high.

The Christmas story may begin with a stable, Alexander emphasizes, but it ends in a very different place.

Each year, as we approach December 24, I worry that we lose sight of this insight. Like so many of our other Christmas carols, most of us seem content with the trappings of Christmas—not just the sleigh bells and the tinsel and the mistletoe, but the stable and the shepherds and the angels, too. Christmas, though, is much bigger than the stable and the manger and the hay. Christmas utterly reshapes the relationship between humanity and God. The more we try to get beyond the stable, I think, the more we’ll understand what Christmas is really about. 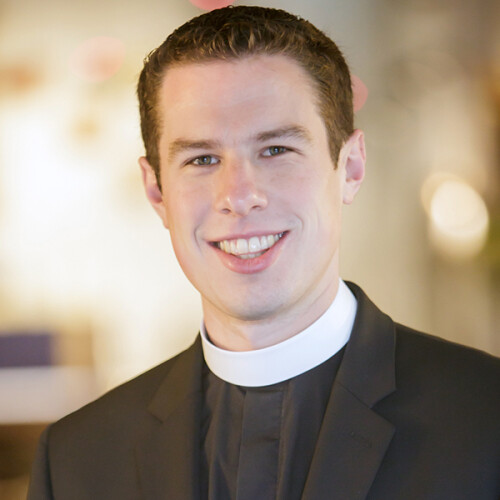 The Reverend Peter D. Thompson was appointed Vicar in July 2021 after serving as Associate Rector for Formation and Liturgy since 2019. As Vicar, Peter works closely with the Rector in visioning, managing, and implementing programming to nourish, equip, and grow the parish. Peter still leads our worship, liturgy, adult education and formation programs and continues to serve as a priest and pastor among us, sharing in sacramental, preaching, and teaching duties, as well as in the pastoral care of our members. Having provided steady and effective leadership through the extraordinary challenges of a pandemic year, Peter proved to be well qualified to assume the responsibilities of Vicar. In this role, he coordinates the many worship services held each week at St. Bart's, working with clergy, staff, and lay volunteers to ensure that our worship is as reverent and as seamless as possible. He plans and facilitates a wide variety of educational offerings for adults, including The Forum.

Peter came to the Episcopal Church at a young age through the chorister program at Washington National Cathedral. A graduate of Columbia and Yale, he served as Assistant Rector of St. Paul's on the Green in Norwalk, Connecticut before joining St. Bart's in early 2019.

Outside of St. Bart's, Peter keeps up his passion for choral music as a singer in the Young New Yorkers Chorus. He also enjoys long-distance running and is an enthusiastic fan of the New York City theatre scene.